GEORGE TOWN: Shoes of all sizes crowd the front door of this little house in Simpang Ampat on the Penang mainland, and as the pumping beat of a Bollywood blockbuster throbs within, female voices chattering in Mandarin can also be heard above the din.

But inside, there doesn’t appear to be a Chinese or Indian woman in sight. The house is filled with ladies in colourful baju kurungs.

Siti Aishah, 53, and her seven daughters have for the past month been gathering at her eldest daughter’s house in Simpang Ampat once a week to break fast during Ramadan.

This Malay family relaxes in a circle on the floor, enjoying bowls of steaming red curry and rice on carefully laid out Chinese newspapers.

Fingers dripping with curry, Aishah and her seven daughters may look like typical Malays, but they have an extensive line of Chinese ancestors. They have the spicy mix of India in their DNA as well.

“My mother is Chinese and my father Indian. When I was 22 years old, I married a Malay and converted to Islam,” Aishah, formerly known as Beramah A/P Manickam, tells FMT. 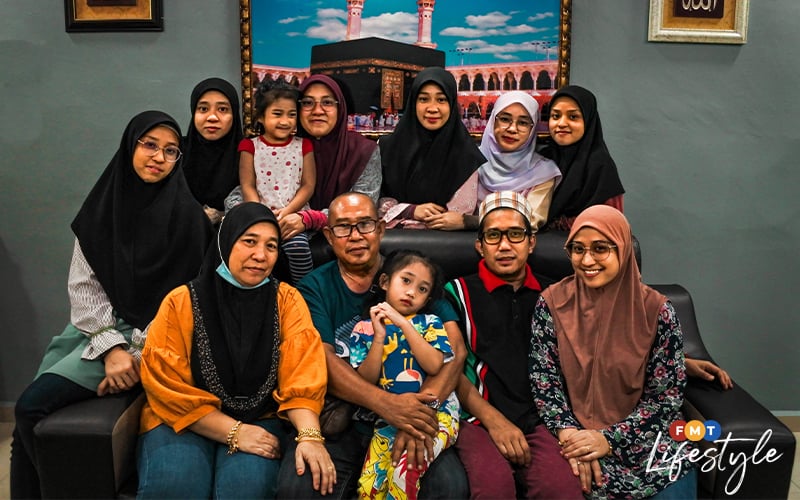 All of Aishah’s girls speak more than one language and her two eldest, Siti Azirul Anis, 29 and Siti Noor Ain, 27 can understand and speak a smidgen of Tamil.

“I sent my daughters to Chinese school as the maths there is better,” she laughs, but then admits that the main reason was so they could learn another language.

Knowing Mandarin does indeed come in handy when they need to exchange secrets in public, she says cheekily.

Aishah is the multilingual queen of the household though, as she easily switches between Malay, Mandarin, Hokkien and Tamil to join in with her daughters.

The family gathers at least three times a year as they celebrate all three of the different new years in Malaysia. They sing Chinese New Year songs and snack on homemade Indian murukkus regardless of which new year it is.

Aishah has three brothers. Her first brother is married to an Indian so Deepavali is celebrated at his house.

Her youngest brother, Vasuphevan A/L Manickam, 48, has a Chinese wife so every Chinese New Year, Aishah and her family dress in red and head over to his house for the celebrations.

Whichever new year it is, everyone gathers under one roof and enjoys each other’s company while chatting and squabbling in four different languages.

“We don’t watch Malay shows, but we do watch a lot of Tamil shows as my husband loves them,” Aishah says.

“Singam is one of our favourite movies and we’ve watched all of the shows that Vijay’s acted in,” she says, adding that Chinese films starring Andy Lau are also popular with the family.

Aishah’s third daughter, Fatehah, chimes in, saying they also enjoy Korean dramas, even though they have no Korean blood in them.

Foodwise, a world of different flavours is on the menu every day.

Some days Aishah is flipping golden Indian thosai, while other days you’ll find her serving up bowls of homemade koay teow thng and curry mee.

Fatehah can’t enjoy her mother’s cooking every day as she’s usually working on the front line at the mainland quarantine centre.

Being able to speak Mandarin comes in handy at work, where she’s always in demand as an interpreter.

“There are a lot of foreigners stuck in the quarantine section and many of them can only speak Mandarin,” she says.

As the pandemic continues to rage throughout Malaysia, this year’s Hari Raya will be tough on many families.

One thing that will remain the same however, is the sense of “muhibbah” in Siti Aishah’s family.

Muhibbah is a Malay term that describes the harmony of multiple races, religions and cultures coming together in the spirit of peace and tolerance.

In Malaysia, it is used to characterise the harmony shared between those of diverse backgrounds, much like Siti Aishah’s colourful family.