Johor – The Land of Food, Shopping and Entertainment

Johor is a popular tourist destination especially among Singaporeans who frequently cross over to enjoy the state’s cheap food and great shopping deals. Besides that, with the launch of LEGOLAND, the first of its kind in Asia, and the new Hello Kitty Town, Johor has become even more famous in the eyes of both local and international tourists alike.

What’s in a Name? The name “Johor” was actually derived from the Arabic word, “Jauhar,” which means “Precious Jewel”. This shows obvious Arabic influences and one look at history will tell you that Johor was frequently visited by Arab traders who would come here to trade spices. The Siamese, on the other hand, called it The “End Land” or “Gangganu” meaning “precious stones”. The State of Johor first came about in the early 16th century when Sultan Mahmud Syah, the last heir to the Malacca throne, escaped from Malacca after it was conquered by the Portuguese. Johor, however, only became more famous and developed when it was under the reign of Sultan Abdul Bakar, who ascended the throne in 1866. Under his reign, several changes were made to the Johor State administration making it more efficient. Vast development also took place in the form of the construction of government buildings, police stations, mosques, the Court and the Grand Palace, which instantly earned the Sultan the title as the “Father of Development in Johor”. Currently, Johor continues to prosper and is known as one of the advanced states in Malaysia. 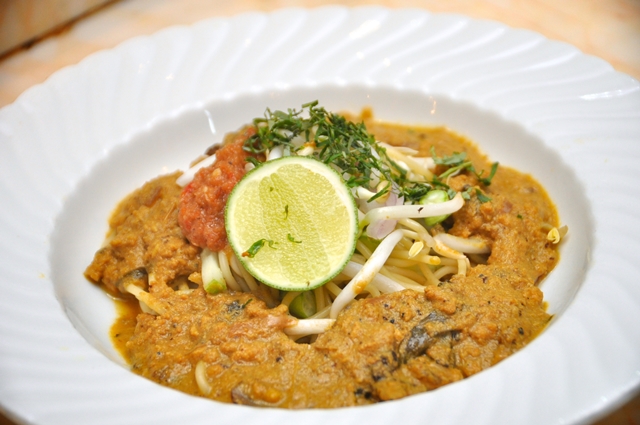 Johor is considered a food haven with its vast variety of gastronomical delights, which are sure to satisfy your taste buds. One famous dish here is the Johor laksa which is a spicy noodle soup commonly found almost anywhere in Malaysia. However, the Johor version has its own unique touch. Unlike the other varieties found in Malaysia, the Johor version uses coconut milk, dried prawns, lemon grass, spices akin to curry, beansprouts and mint leaves, Also, unlike most laksas found it Malaysia, the Johor laksa uses spaghetti noodles instead of the normal vermicelli ones.

Another famous local delicacy in Johor is the otak-otak which is rather popular in the seaside town of Muar. Otak-otak is basically a kind of fish cake which consists of a mixture of fish paste, spices, shallots, garlic and coconut milk, wrapped in coconut leaves or banana leaves, and then cooked by steaming or grilling over charcoal fire.

Muar town is also famous for its mee bandung, which is yellow mee soaked in a special gravy and topped up with slices of beef, prawns, dried shrimps and crushed peanuts. This dish can also be found throughout Malaysia; however, the original version is from Muar and is deemed the best and most delicious one.

Johor is also known as an entertainment hub housing a wide array of theme parks and other entertainment facilities catering to both adults and children. One of its most popular theme parks is LEGOLAND, which features over 40 interactive rides, shows and attractions. Located in Nusajaya, Johor, this park is the sixth of its kind in the world. It consists of both a theme park and water park and is definitely a good place to be, especially for Lego lovers and families with children. The Miniland, one of its main attractions, showcases “mini” versions of famous monuments such as the Petronas Twin Towers, The Merlion Statue, the Taj Mahal and others, all built with an amazing number of more than 30 million Lego bricks!

Another well-known new attraction is the Sanrio Hello Kitty Town. Located only 10 minutes away from Legoland within the Puteri Harbour Family Theme Park building, this theme park is the first of its kind outside of Japan. Featuring a wide variety of walk-through attractions, interactive activities and rides all following the Hello Kitty theme, this place is a haven for both Hello Kitty lovers and little girls alike. One notable attraction here is the Hello Kitty House which features a complete setup with a living room, a bedroom, a bathroom and a kitchen. Visitors can also enjoy interactive fashion and crafts activities such as jewelry making, costume dress up, nail art, cookie making and so on.

Besides these two theme parks, we’ve also heard from news sources that an Angry Birds theme park, the first of its kind in Southeast Asia, is set to open at the Johor Bharu City Centre (JBCC), this coming May.  More updates to come once the theme park is launched.

Johor is also not short of nightlife entertainment with its extensive range of luxurious nightspots that offer good food, a variety of alcoholic indulgence and live band performances. There are also various happening dance clubs for party-lovers who want to dance the night away. These nightspots are mainly concentrated in the state capital of Johor Bahru with the Fun Zon Complex being one of the most popular spots. Johor is also a well-known shopping destination, especially among Singaporeans who prefer to shop here due to its cheaper prices. It has a vast array of huge, modern shopping malls such as The Johor Premium Outlet, Aeon Tebrau City Shopping Centre, City Square Johor Bahru Shopping Mall and so on. The Johor Premium Outlet is one of the latest malls to join the string of shopping malls in Johor. Showcasing a selection of 130 designer brand outlets with savings of 25% to 65% every day, this mall is indeed a shopper’s paradise for those who go for branded goods. Some of the established brands featured here include Burberry, Coach, Zegna, Armani Exchange, Lacoste, Flow, Gap, DKNY, Calvin Klein, Adidas and Nike.

The Aeon Tebrau City Shopping Centre is also another good place to shop. This mall has a mixture of both branded items such as G2000, MNG, Giordano, MAC and Espirit, and other smaller names if you’re not that keen on branded goods. Besides shopping, there is also a wide selection of food choices and a cinema for entertainment. Items and food sold here are at reasonable prices.

The City Square Johor Bahru Shopping Mall is located right beside the JB-Singapore checkpoint and is therefore popular amongst Singaporean patrons. Housing everything from mid-range restaurants to supermarkets, clothing stores, bookshops and a cineplex, this mall is one of the most modern shopping malls in Johor that is definitely worth visiting.

Hotels and Resorts in Johor 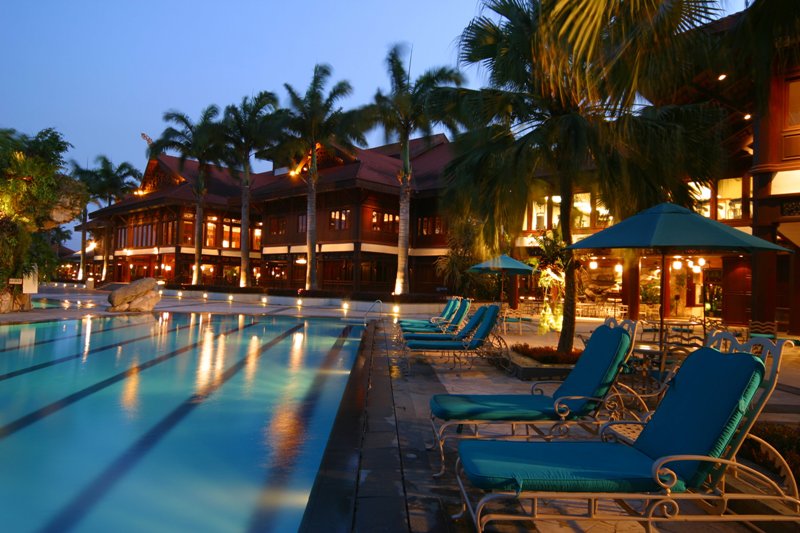 Accommodation in Johor is plentiful ranging from cheap budget hotels to luxury, high-end resorts. Many of the budget hotels here offer good, value for money services at low prices. These hotels include:

For a more luxury and comfort stay at Johor, there are also a number of 5-star hotels and resorts which offer quality facilities and services. These hotels include: One nearby place in Johor that is worth visiting is Desaru, which is a coastal resort area located in the Southeastern part of Johor. Although it is not such a well-developed resort and is currently not known to many, there are actually quite a number of things that you can do here. For instance, you can go sunbathing at the beach, have a taste of its delicious local seafood, watch fireflies at the Sungai Lebam River, and visit its fruit and ostrich farm.

Another place worth stopping by is Ayer Hitam, which is a border town between the Batu Pahat and Kluang districts in Johor. Over here, you can find a wide array of quality ceramic items such as flower vases in an assortment of colors, photo frames, jars, ashtrays, and other home decorative items. This place is also well-known for its local tidbits such as prawn crackers, steamed corn, tapioca chips, and the famous “otak-otak”.

Located less than an hour’s drive away from Johor is the renowned island state of Singapore. Housing world-class attractions such as the Universal Studios Singapore, Adventure Cove Waterpark, Gardens by the Bay, the Avalon night club, and the Singapore flyer, it would definitely be a shame not to cross over to Singapore on your visit to Johor. Johor is accessible through several means. If you are coming from overseas, you can take a flight via Kuala Lumpur or, Kota Kinabalu and Kuching in East Malaysia to the Sultan Ismail International Airport at Johor Bahru. There are also flights connecting this airport to the Bayan Lepas International Airport in Penang.

If you are planning on driving to Johor, Johor Bahru city is easily accessible via the North-South Expressway which connects all major towns from the north including the capital city of Kuala Lumpur and Penang. Driving from KL would take you around 3 ½ hours while driving from Penang would take you approximately 7 hours. Travelers from Singapore, on the other hand, can enter Johor via the Causeway Link which would only take you less than an hour to reach there.

For budget travelers, taking the bus would be the best option. For those travelling from KL, buses to Johor are available from several bus terminals such as Terminal Bersepadu Selatan, Shah Alam Terminal and Klang, to the terminals and stops in Johor. If you are travelling from Penang, you can take the bus from either the Penang Komtar or the Sungai Nibong bus terminals. From Singapore, buses are also available from various pick-up points such as Kranji MRT station, Jurong East, Woodlands, Yishun and Changi Airport.